Twelve years ago, a mangy tabby made her home in Southwark Cathedral, her first steps on the path to celebrity. During her extraordinary life she met the Queen, starred in a children’s book and generated gazillions of followers on her requisite social media acccounts.

Doorkins Magnificat arrived at Southwark Cathedral in 2008, a hungry stray in search of food scraps and a few kind words. The vergers, who open the cathedral doors each morning, obliged with both.

She wasted no time making herself at home with a series of fave spots: next to a warm pipe beneath the stone seats of the chancel, on a cushion in the consistory court, stretched across a grate wafting hot air into the cathedral’s vast interior. Each Christmas, she snoozed in the straw of the cathedral’s nativity scene.

She had no truck with status or occasion. The bishop was regarded with disdain. She indulged in long, intimate washes during solemn prayers; she sauntered through the nave at Evensong. When the Queen visited, she opened her eyes a fraction, assessed the significance of the occasion, and went back to sleep.

A month after her recent death a thanksgiving service was held under the cathedral’s Gothic arches before she was laid to rest in the churchyard. Andrew Nunn, the dean, told the congregation. “In more normal times, we often host memorial services for the great and the good. But I don’t think there’s ever been a service for a cat.”

Not everyone approved. There had been a bit of a Twitter storm, Nunn said later – not least from some of his own colleagues.

“Is this a joke?” tweeted Philip North, the bishop of Burnley. “I do hope so. If not it’s grossly insensitive to bereaved families and those ministering to them in the NW under the regional coronavirus restrictions.”

But, said Nunn, the story of Doorkins’ life had meaning beyond the simple narrative of a cat finding a new home. She had sought and found sanctuary in a church. “She arrived, she entered and we made her welcome. People concluded that if this little cat is welcome, maybe I am too,” Nunn said.

Doorkins captured the hearts of the clergy, congregation, visiting dignitaries and tourists. But she never quite shed her feral instincts. “No way was she a lap cat. She could be nice at moments but only on her own terms, and she could lash out when she’d had enough. She set the pace in every relationship,” said Nunn.

She settled into a contented life. But Doorkins did not escape the trauma of the London Bridge terror attack in June 2017, when the cathedral was locked down for several days. As usual, she had been put out for the night, and there was no way back through locked doors and armed police.

“When we eventually got back into the cathedral, she ran in and wouldn’t go out again,” said Nunn. Soon after, her health began to fail, with kidney problems, loss of hearing and eventually blindness.

Paul Timms, the head verger, took her home to care for her. Following a stroke, she died in his arms on 30 September. 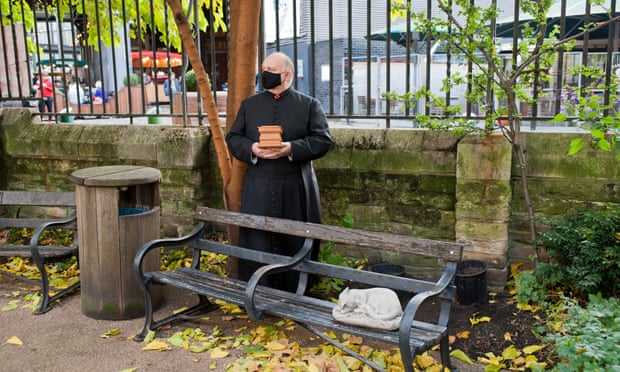 In line with Covid regulations, a maximum of 30 people were permitted to attend her memorial service, though it was streamed for Doorkins’ many admirers. Timms carried her ashes in a wooden casket to a small grave beside a wall separating the peace of the cathedral gardens from the bustle of Borough Market.

Nunn, who confessed he was “not a cat person usually”, said Doorkins had been “a godsend”. He added: “She did more to bring people to this place than I will ever do.”

3 thoughts on “Church Cat is With The Angels”