You’d be hard-pressed to find a rabid cat lover who hasn’t been enchanted by the vintage illustrations of Louis Wain. He created a whimsical world of wide-eyed cats, each scene rich with detail and activity.

Louis William Wain (5 August 1860 – 4 July 1939) was an English artist best known for his drawings, which consistently featured anthropomorphized large-eyed cats and kittens. In his later years, he may have suffered from schizophrenia (although this claim is disputed among specialists), which, according to some

psychiatrists, can be seen in his works. Louis William Wain was born in Clerkenwell in London. His father, William Matthew Wain, was a textile trader and embroiderer; his mother, Felicia Marie/Julie Felicie (Boiteux) was French. He was the first of six children and the only male child. None of his five sisters ever married. At the age of thirty, his youngest sister was certified as insane and admitted to an asylum. The remaining sisters lived with their mother for the duration of their lifetimes, as did Louis for the majority of his life.

Wain was born with a cleft lip and the doctor gave his parents the orders that he should not be sent to school or taught until he was ten years old. As a youth, he was often truant from school and spent much of his childhood wandering around London. Following this period, Louis studied at the West London School of Art and eventually became a teacher there for a short period. At the age of 20, Wain was left to support his mother and his five sisters after his father’s death.

Wain soon quit his teaching position to become a freelance artist, and in this role, he achieved substantial success. He specialized in drawing animals and country scenes, and worked for several journals including the Illustrated Sporting and Dramatic News, where he stayed for four years, and The Illustrated London News, beginning in 1886. Through the 1880s, Wain’s work included detailed illustrations of English country houses and estates, along with livestock he was commissioned to draw at agricultural shows. His work at this time includes a wide variety of animals, and he maintained his ability to draw creatures of all kinds throughout his lifetime. At one point, he hoped to make a living by drawing dog portraits.

At the age of 23, Wain married his sisters’ governess, Emily Richardson, who was ten years his senior (which was considered quite scandalous at the time), and moved with her to Hampstead in north London. Emily soon began to suffer from breast cancer and died three years into their marriage. Prior to Emily’s death, Wain discovered the subject that would define his career. During her illness, Emily was comforted by their pet cat Peter, a stray black and white kitten they had rescued after hearing him mewing in the rain one night. Emily’s spirits were greatly lifted by Peter, and Louis began to draw extensive sketches of him, which Emily strongly encouraged him to have published. She died before this happened, but he continued to make cat sketches. He later wrote of Peter, “To him, properly, belongs the foundation of my career, the developments of my initial efforts, and the establishing of my work.” Peter can be recognized in many of Wain’s early published works.

In 1886, Wain’s first drawing of anthropomorphized cats was published in the Christmas issue of the Illustrated London News, titled “A Kittens’ Christmas Party”. The illustration depicted 150 cats, many of which resembled Peter, doing things such as sending invitations, holding a ball, playing games, and making speeches, spread over eleven panels. Still, the cats remain on all fours, unclothed, and without the variety of human-like expressions that would characterize Wain’s later work. Under the pseudonym of George Henri Thompson, he illustrated numerous books for children by Clifton Bingham published by Ernest Nister.

In subsequent years, Wain’s cats began to walk upright, smile broadly, and use other exaggerated facial expressions and would wear sophisticated, contemporary clothing. Wain’s illustrations showed cats playing musical instruments, serving tea, playing cards, fishing, smoking, and enjoying a night at the opera. Such anthropomorphic portrayals of animals were very popular in Victorian England and were often found in prints, on greeting cards and in satirical illustrations such as those of John Tenniel.

Wain was a prolific artist over the next thirty years, sometimes producing as many as several hundred drawings a year. He illustrated about one hundred children’s books, and his work appeared in papers, journals, and magazines, including the Louis Wain Annual, which ran from 1901 to 1915. His work was also regularly reproduced on the picture postcards, and these are highly sought after by collectors today. In 1898 and 1911 he was chairman of the National Cat Club.

Wain’s illustrations often parody human behavior, satirizing fads, and fashions of the day. He wrote, “I take a sketch-book to a restaurant, or other public places, and draw the people in their different positions as cats, getting as near to their human characteristics as possible. This gives me doubly nature, and these studies I think [to be] my best humorous work.”

Wain was involved with several animal charities, including the Governing Council of Our Dumb Friends League, the Society for the Protection of Cats, and the Anti-Vivisection Society. He was also active in the National Cat Club, acting as President and Chairman of the committee at times. He felt that he helped “to wipe out the contempt in which the cat has been held” in England.

Despite his popularity, Wain suffered financial difficulty throughout his life. He remained responsible for supporting his mother and sisters and had little business sense. Wain was modest, naive, and easily exploited, ill-equipped for bargaining in the world of publishing. He often sold his drawings outright, retaining no rights over their reproduction. He was easily misled and occasionally found himself duped by the promise of a new invention or other money-making schemes.

He traveled to New York in 1907, where he drew some comic strips, such as Cats About Town and Grimalkin, for Hearst newspapers. His work was widely admired, although his critical attitude towards the city made him the subject of sniping in the press. He returned home with even less money than before, due to imprudent investment in a new type of oil lamp.

This cat, like many painted during this period, is shown with abstract patterns behind it. Psychologists have cited this increased abstraction as symptomatic of Wain’s schizophrenia, but others have argued that his “wallpaper cats” simply recall the patterns in his mother’s fabrics.
The onset of Wain’s schizophrenia may have been precipitated by Toxoplasma gondii, a parasite that is excreted by cats in their feces. The theory that toxoplasmosis can trigger schizophrenia is the subject of ongoing research, though the origins of the theory can be traced back as early as 1953.

When his sisters could no longer cope with his erratic and occasionally violent behavior in 1924, Wain was committed to a pauper ward of Springfield Mental Hospital in Tooting. A year later, he was discovered there, and his circumstances were widely publicized, leading to appeals from such figures as H. G. Wells and the personal intervention of Prime Minister Stanley Baldwin. Wain was transferred to the Bethlem Royal Hospital in Southwark, and again in 1930 to Napsbury Hospital near St Albans in Hertfordshire, north of London.

Napsbury was relatively pleasant, with a garden and colony of cats, and he spent his final 15 years there in peace. While he became increasingly deluded, his erratic mood swings subsided, and he continued drawing for pleasure. His work from this period is marked by bright colors, flowers, and intricate and abstract patterns, though his primary subject remained the same. He is buried in his father’s grave at St. Mary’s Roman Catholic Cemetery, Kensal Green, London.

Writing in 2001, Dr Michael Fitzgerald disputes the claim of schizophrenia, saying that Wain more likely had Asperger’s syndrome (AS). Of particular note, Fitzgerald indicates that while Wain’s art took on a more abstract nature as he grew older, his technique and skill as a painter did not diminish, as one would expect from a person with schizophrenia. Moreover, elements of visual agnosia (the inability to recognize certain objects, even though a person can recall them if asked) are demonstrated in his painting. If Wain had visual agnosia, it might have manifested itself merely as extreme attention to detail.

Various art styles used by Louis Wain over the course of his life within mental institutions. It is completely unknown what chronological order they may have been done in. Indeed, some may have been in progress while others were started and completed.

Series of his paintings have commonly been used as examples in psychology textbooks to putatively show the change in his style as his psychological condition deteriorated. However, given that Wain did not date his works, it is not known if these works were created in the order usually presented. Rodney Dale, the author of Louis Wain: The Man Who Drew Cats, has criticized the belief that the paintings can be used as an example of Wain’s deteriorating mental health, arguing that “Wain experimented with patterns and cats, and even quite late in life was still producing conventional cat pictures, perhaps 10 years after his [supposedly] ‘later’ productions which are patterns rather than cats.”

In 2012 however, Dr Kevin Van Eeckelen, in an article about psychotic patterns proposed that evidence of deterioration was found in Louis Wain’s earlier (narrative) work, for instance in his Louis Wain Kitten Book (1903). This analysis is based on the mimetic (girardian) view on psychosis, which focuses on the continuity between ‘normality’ and ‘madness’. 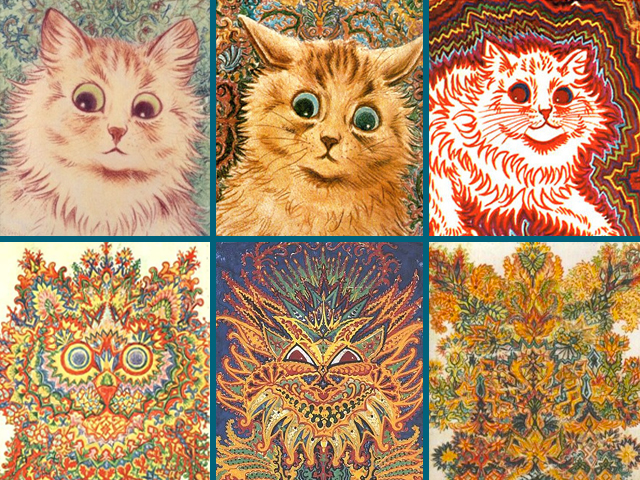 In December 2012, the psychiatrist Dr David O’Flynn, at a gallery talk at an exhibition of “Kaleidoscopic Cats” at the Bethlem Royal Hospital Archives & Museum, proposed viewing the series as the creation of two men, “Louis Wain, who created them, and Walter Maclay (1902–1964), the psychiatrist who organized them into a series.”

O’Flynn suggests Maclay saw in the series a proof of his own ideas, partly based on his 1930s experiments with art and mescaline-induced psychosis. Maclay concluded that the creative ability of people with schizophrenia deteriorated. O’Flynn says that in the experiences of those who produce outsider art, that is artists who are self-taught, and who often work outside the formal art world, the link between schizophrenia and the deterioration of artwork doesn’t hold true. Looking at Wain’s late work, O’Flynn sees greater experimentation and use of color, not a deterioration. Despite the series being known to be assembled, and the pictures not dated since the 1960s, “their representation of something that doesn’t exist, namely psychotic deterioration, has been surprisingly robust”. The series has become “the Mona Lisa of asylum art”.

H. G. Wells said of him, “He has made the cat his own. He invented a cat style, a cat society, a whole cat world. English cats that do not look and live like Louis Wain cats are ashamed of themselves.”

His work is now highly collectible, but forgeries are common. Wain also created a number of ceramic pieces produced by Amphora Ceramics. Dubbed the “futurist cat” the pieces were of cats and dogs in angular shapes and with geometrical markings. They are considered to be in the Cubist art style and represent Wain’s artistic expression in ceramics.

There are a number of books available showcasing Wain’s life and work. Here are a few books and cards that are not hella expensive collector editions: