When an orangie and a house panther pair up, there's no telling what shenanigans that may result. (Queue up the Mission Impawsible music….)

At the Hiroshima Onomichi City Museum in Japan, a sleek black cat and his ginger buddy have been plotting daily break-ins for the past two years. And every day, a security guard puts the kaibosh on their fun.

But get this: even though the museum forcibly removes the cats when they attempt to enter, it still makes money off the pair by selling their likenesses on souveniers in the gift shop!

These cultured cats started showing up in the summer of 2016 when the museum had a cat exhibition. They've been attempting entry every day since.

A guard at the Hiroshima Onomichi City Museum actually spend most of his day shooing the cats away from the automatic doors. Video footage from a museum staff-run Twitter page that is dedicated to every movement that the cats make show the patient guard gently blocking the cats’ entry.

The guard who removes them does it kindly, punctuating the eviction with a sweet pat in the head. 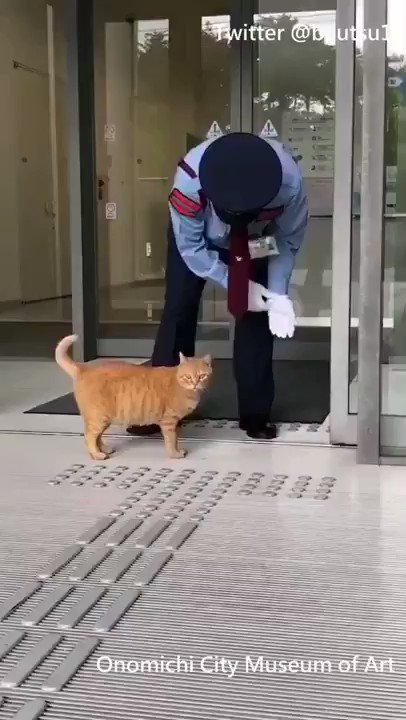