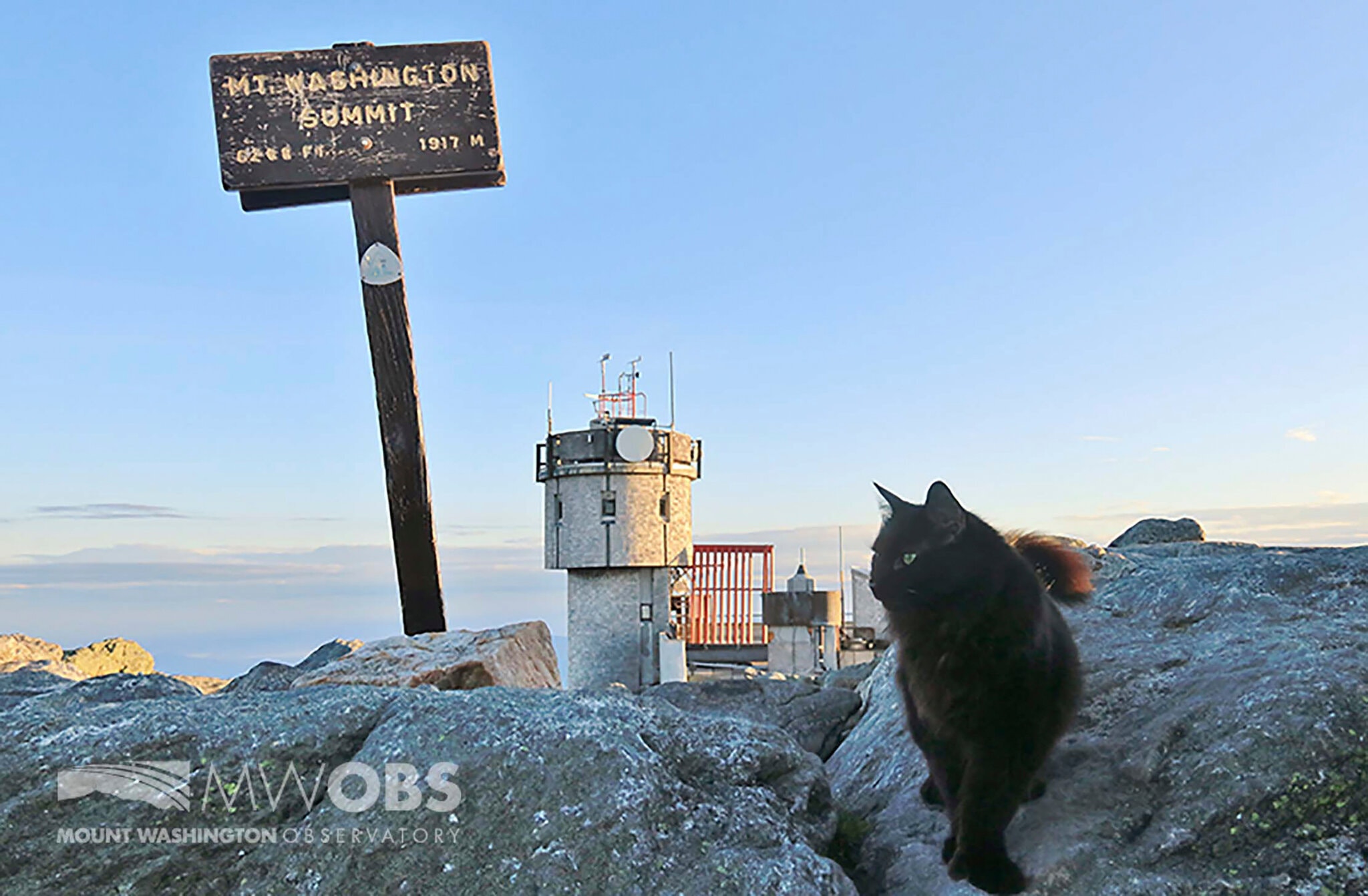 At 6,288 feet above sea level, Mount Washington in northern New Hampshire is known to countless travelers and bumper-sticker aficionados as the highest point in the Northeast and, according to the meteorologists who work there, “home of the world’s worst weather.”

And for nearly nine decades, there has always been a cat in residence. The latest one, a black Maine coon named Marty who arrived at the summit in 2008, died on Saturday of an “unexpected illness,” Rebecca Scholand, an official at the Mount Washington Observatory, said Monday night. Marty was 14, she said. Or 15.

Marty is survived by dozens of meteorologists and interns who work at the observatory, a nonprofit organization that collects weather data at the summit every hour of every day. “I want to say his eyes were green — I’m pretty sure they were green,” said Ms. Scholand, the summit operations manager for the observatory. “Nice long fluffy tail.”

“There were days when he would want to rub up against your leg and sit in your lap when you were doing your work,” she said. Other times, she added, he would greet people “with his tail up in the air, just flaunting the fact that he was the highest cat in New England.”

Ms. Scholand, a native of Long Island who arrived at the summit in 2010 as an intern, said Marty would dole out his affections in a uniquely feline way. “He might love you one week and the next week, he wouldn’t come near you,” she said. “Typical cat.”

Though as many as a quarter of a million people visit the summit during the summer, by winter it turns into an “arctic island,” Ms. Scholand said. At the observatory, housed inside a large concrete structure built into the side of the mountain, winters are intense. “If you’ve ever watched ‘The Shining,’ it hits a little too close to home on the summit,” she said.

During the winters, “we typically see hurricane-force winds about every three days, and usually get 100 mile-per-hour wind gusts at least once a week,” Ms. Scholand said, adding, “We can have visibility as low as you really can’t see anything” as well as “supercooled water droplets that freeze on contact.”

Those frozen water droplets can be destructive and disrupt instrumentation. “That’s really the main reason we have such a huge human element on the summit,” she explained, “because we’re there to keep our instruments de-iced to make sure things are working operationally.”

So, as teams of workers hunker down in the summit for a week straight of work — monitoring the weather, protecting the equipment — they try to maintain some connection to the outside world.

“You’re very disconnected from people” during long stays at the summit, Ms. Scholand said. “You really rely on internet connections and phone calls to connect with people.” And, as anyone who has quarantined and attended a Zoom party can tell you, that doesn’t quite cut it.

And that is why there are cats.

Ms. Scholand said having a cat around transforms the summit from a place “where you live and work to somewhere where you work and call home in those weeks that you are there.”

The origin story of cats at the observatory, which began operating in 1932, is slightly less glamorous. “Back in kind of our beginning stages they were mostly working cats,” Ms. Scholand said; they would help keep the mice out of the food that was stored there for workers and visitors.

Over time, the cats became a sort of mascot of the observatory. Before Marty — who won the mascot position in a 2008 election in which more than 8,000 visitors to the observatory’s website voted — there was Nin, who was featured in a children’s book, “Cat in the Clouds.” (The summit is so high that there are days when “we’re actually above the highest level of cloud,” Ms. Scholand said, explaining the book’s title.)

Before Nin, there was Inga. Ms. Scholand said cats “retire” from the observatory when they start to falter. Marty was preparing to retire in 2021.

Ms. Scholand, who has two kittens that were found on the side of a road (Miss Katie and Dan), a cat (a Himalayan named Yetti) and a dog (a Great Dane named Sully), said of Marty’s temperament, “In some ways it’s that aloofness that lets you know they still love you.”

She said details of selecting Marty’s successor, and whether there would be an election, had not yet been finalized.