I enjoyed the 3rd season premiere of Star Trek Discovery, even more so when I saw a new cast member, a Maine Coon named Grudge.

Grudge is one in a long line of Trek cats, going back to the original series.

In 2268, the USS Enterprise, on a mission in the 20th century, encountered Gary Seven, agent of a benevolent alien power that interfered to prevent civilizations from destroying themselves. He was accompanied by a cat named Isis, who proved popular with the ship’s officers.

Chester was the pet cat of Liam Bilby at his home on Farius Prime in 2374.

In 2370, there were 12 male felines aboard Enterprise-D. (TNG: “Genesis”) The biggest feline star, of course, was Cmdr Data’s cat, Spot.

Remember that time when the ship crashed, and it took some time before Data was able to retrieve Spot from the rubble? Makes me weepy just thinking about it.

Data’s love affair with cats was infectious, spreading to other shipmates like Reginald Barclay: 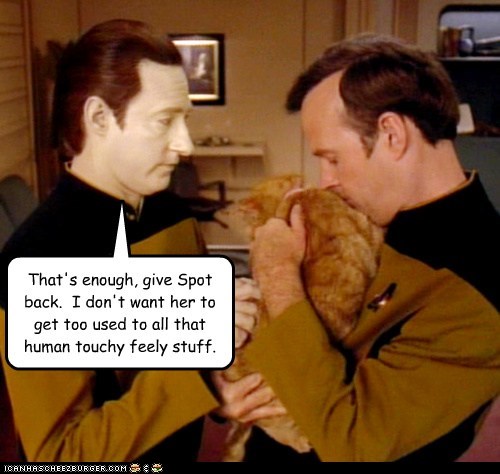 He was unable to turn every shipmate into a cat lover, however:

Spot proved to be Data’s muse:

In fact, Data and his love of cats is so popular, they inspired an action figure set (here seen with Dr Crusher):NOTE: I know what you’re thinking: That can’t possibly be Beverly cuz she’s not wearing blue. True, Beverly is red-shirted, not in the blue of a medical officer, and Data sports a skunk stripe and civies. These figures are from the “All Good Things” episode, which depicts the characters in future versios of themselves.

Barclay (later on Voyager) was so enamored of Spot, he adopted his own cat and named him Neelix after a Voyager shipmate.

Tasha Yar appeared with a cat in the TNG episode “Where No One Has Gone Before.”She attempted to protect him while being pursued by a rape gang: 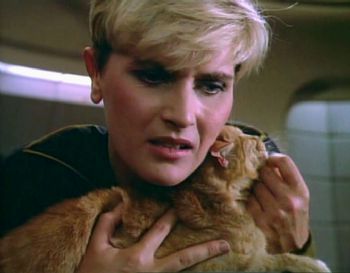 Grudge joins the luminaries above as a Federation kitty. For a behind-the-scenes look at how Grudge prepared for the role watch the video:

Interestingly, cats outnumber dogs in the Star Trek universe (YAY!). The dogs I remember are:

…I’m sure I’ve missed a few TrekCats TrekDogs along the way; please leave a comment with the ones I missed! 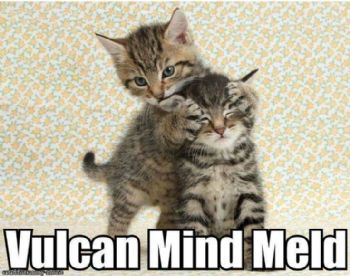 3 thoughts on “Move Over, Spot and Isis. There’s a New Cat in The Star Trek Universe.”